Location of a bird house 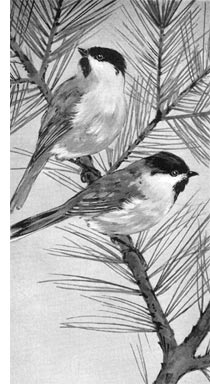 The location of a bird house or food shelter has much to do with its success, for the reason that birds have decided notions as to proper surroundings for a dwelling.

Martins prefer to breed near houses, but not within 20 feet of trees or buildings. Bluebirds are inclined to select orchards or pastures having scattered trees.

Wrens, thrashers, and catbirds live in thick shrubbery. Robins like trees with sturdy trunks and branches.

Titmice, nuthatches, and most of the woodpeckers are woodland species, although flickers and red-headed woodpeckers are more at home among the scattered trees of roadsides and pastures.

Song sparrows frequent weedy swales and brush fences. Swallows do not enter woods so that a house would be as attractive to them in one open place as in another. The eastern phoebe, the black phoebe, and the house finch, while not limited to the haunts of man, are noticeably partial to them.

Crested flycatchers, screech owls, barn owls, and sparrow hawks are governed more by convenience than by taste; although normally inclined to hold aloof from man, they have in many instances reared their broods in close proximity to dwellings. Barn owls, true to their name, accept suitable quarters in buildings without hesitation.