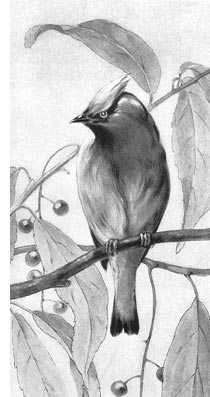 Birds have numerous enemies from which a careful landlord will try to guard them. Among these is the English sparrow, whose persistent attacks too often drive more desirable birds away from their nests and from the neighborhood.

European starlings, which are to be condemned for their pernicious interference with native house birds.

Cats and large snakes are enemies of birds, the former perhaps killing more birds than any other mammal. Trees and poles supporting houses should be sheathed with tin or galvanized iron to prevent these enemies from climbing to the nests.

Squirrels give more or less trouble by gnawing houses, eating eggs, and killing nestlings. Red squirrels, in particular, have a very bad reputation in this respect, and many experimenters keep their grounds free from them. Some regard flying squirrels as but little better than red ones. Even gray and fox squirrels are occasionally troublesome.

It is not necessary, however, that bird lovers should wage indiscriminate warfare against all squirrels. It is far better to adopt the rule never to kill a squirrel unless there is reason to believe that it has acquired the habit of eating eggs or young birds; the result will probably be that not more than one red squirrel in fifty nor more than one gray squirrel in a hundred will have to be killed.

Where squirrels are numerous they give more or less trouble by gnawing and disfiguring houses. This damage maybe prevented, however, by covering the parts about the entrance with tin or zinc.

Another means of attracting birds about human habitations is to furnish an abundance of food, preferably in food shelters. If one is unable to make shelters that will protect food in all kinds of weather, the food may be fastened to trunks or branches of trees or scattered in sheltered places on the ground. A decided advantage in having shelters, aside from that of protecting food, is that they may be placed where the birds can be watched conveniently.

When shelters are used the birds are first baited by placing food, such as suet, seeds, or cracked nuts, in a conspicuous place, and then led by degrees to enter the inclosure. Designs for two food shelters are exhibited in figures 42 and 46, one of which is supported by a post, the other by a tree. Structural details are shown for both. There is no bottom to either of them.